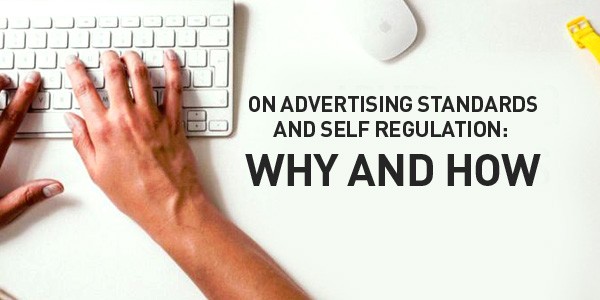 Marketing is driven to garner consumer confidence, and while most marketers do not make an effort to mislead or defraud, there is often a fine line between what you can do… and what you shouldn’t!

This is why marketing needs to be regulated, so that a clear line in drawn in the sand on how, when and where marketers can reach their consumers. There are two forms of regulations that apply to marketing; legislative regulations and the self-regulated code of ethic and best practices. However, as an industry in perpetual revolution it is impossible for legislative regulation to keep pace. The response of old was for legislative regulation to be more rigid and conservative; as it needed to take a general perspective, which only served to curtailed creativity. While a book of laws serves its purpose as a list of “Do’s” and “Don’ts”, it would most definitely not be conducive for businesses and brands to thrive.

Self-regulation is seen as a more proactive and dynamic system that advocates proportionate and evidence-based policy making, and does not place a bureaucratic burden on practitioners and more importantly, consumers. This is why the MAA has been at the forefront in prompting best and ethical practices in Malaysian advertising industry, as one of the principal proponents of the self-regulation of the industry.

The MAA is dedicated to ensuring that advertisers adhere to the rule that all marketing initiatives must be legal, decent, honest and truthful, prepared with a sense of social responsibility to the consumer and society in general, and with utmost respect for the principles of fair competition.

As advertisers ourselves, we strive to protect our rights to conduct business and market our products, but to do so by accepted standards of professionalism, and this is shown through our active roles within the Advertising Standards Authority of Malaysia (ASA) and the Communications & Multimedia Content Forum (CMCF), not just as the primary representatives of advertisers but as industry leaders.

These two bodies are responsible for enforcing the Malaysian Code of Advertising Practice (MCAP); which applies to all printed materials and media, and the Malaysian Communications and Multimedia Content Code (Content Code); which addresses all broadcast and electronic media, respectively. Though in essence ASA and CMCF have the same objective, they each are distinctly different and act from different perspectives.

The CMCF however diverges from this, as though it too is a self-regulation initiative, it is empowered by the Communications and Multimedia Act 1998 (CMA 98). The CMCF council; which oversees it, comprises members from six categories namely Advertisers, Audiotext Hosting Services Providers, Broadcasters, Content Creators/Distributors, Civic Groups and Internet Service Providers, whom are responsible for ensuring that the Code is obeyed and are also tasked with keeping the Content Code up to date.

As a voluntary system however, the MAA knows that self-regulation relies very much on the good will, good sense, and commitment of advertisers and through this promote consumer and government confidence in the industry’s ability to self-regulate. The failure to do so could attract greater legislation!

To this end, the MAA promotes greater understanding of the benefits of self-regulated codes and works towards getting all advertisers to abide by the codes, as it pushes for greater liberalization inline with the times.

As the recognized voice of the advertisers, the MAA is often consulted on issues related to legislation of the industry too. Over the years, we have also taken proactive and preemptive steps in addressing many sector-related regulations and issues; acting as the advertisers’ liaison with ministries and governmental bodies, as part of our continuous efforts to safeguard advertisers’ interests and maintaining some level of normalcy in this environment of ever-changing rules and views.

developer@kingdomdigital.com.my August 13, 2021
While every effort is made to ensure that accurate information is disseminated through this publication,…